Using BRT as a Transit Band-Aid 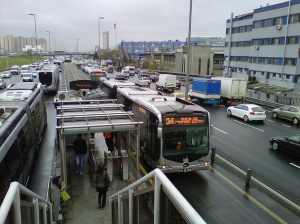 When a new metro line opened up in Istanbul a couple weeks ago, it mostly served as a reminder of something the city has been awaiting for the better part of a decade. That would be the massive Marmaray project, a rail tunnel beneath the Bosphorous strait that will link the European and Asian sides of the intercontinental city. The delays have been reasonable — crews have had to deal with tricky geography, safety precautions required by a nearby fault line, and archeological discoveries made during the digging — but the initial phase is still a year from opening, and the full deal several more.

The city wisely recognized that the immediacy of its traffic problem demanded some sort of short-term solution. Its response was to lay down, within a couple of years, a bus-rapid transit system known as the Metrobus. The 26-mile line operates in dedicated lanes along the D-100 expressway and connects both sides of the city across the Bosphorous Bridge. By most measures it’s been a great success, according to a recent profile of the system in the Journal of Transport Geography. {…}