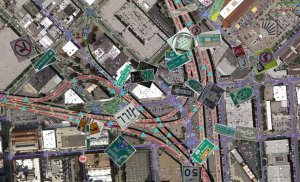 Behind every Google Map, there is a much more complex map that’s the key to your queries but hidden from your view. The deep map contains the logic of places: their no-left-turns and freeway on-ramps, speed limits and traffic conditions. This is the data that you’re drawing from when you ask Google to navigate you from point A to point B — and last week, Google showed me the internal map and demonstrated how it was built. It’s the first time the company has let anyone watch how the project it calls GT, or “Ground Truth,” actually works.

Google opened up at a key moment in its evolution. The company began as an online search company that made money almost exclusively from selling ads based on what you were querying for. But then the mobile world exploded. Where you’re searching from has become almost as important as what you’re searching for. Google responded by creating an operating system, brand, and ecosystem in Android that has become the only significant rival to Apple’s iOS.

And for good reason. If Google’s mission is to organize all the world’s information, the most important challenge — far larger than indexing the web — is to take the world’s physical information and make it accessible and useful.  {…}